If anyone out there is a fellow single, working parent then you know that it is difficult to get a healthy dinner on the table most nights.  Sometimes you come home and the thought process is definitely Screw it, just order a pizza - I am EXHAUSTED.  But, here is a healthy, fairly simple recipe that should only take about 30-40 minutes to make, which may help veer you away from take out.  In part because it is a homemade version of take out.  And, as always, I stuff as many nutrient-rich veggies in as I can :)

Now if you told your kids that dinner tonight was red cabbage, bell peppers, kale, mushrooms, onions and shrimp what would their reaction be?  If they are anything like mine, their reaction will be, "EW GROSS!!!"  But tell them Thai Shrimp Rolls and it's a different story.

Now, in case you didn't know, red cabbage is super-high in vitamin C, has a good amount of vitamin A, and even some calcium, and iron.  Plus, it is cheap.  It is not cooked much in this recipe so it keeps almost all of its nutrients - yay raw veggies! 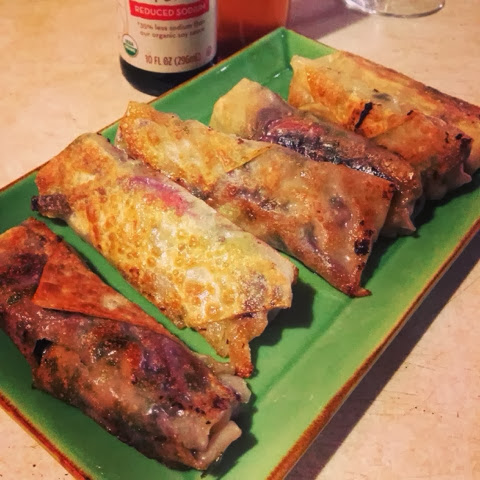 To make approximately 6-8 rolls (can double if needed) - go all organic if you can :)

Heat a pan with olive oil.
After heated toss in onions and peppers (if raw, if frozen peppers, throw in next step), cook for 5 minutes on low heat.

Next step is, throw in all other veggies EXCEPT cabbage,  add in shrimp, fish sauce, wine, honey, and seasoning.
Cook until shrimp are done - about 4-5 minutes if fresh.
Now remove from pan and put in a bowl to cool and get ready to assemble rolls.

When the shrimp veggie mixture is slightly cooled add in the raw cabbage and start assembling the rolls.  You place the egg roll wrapper on a plate facing you so it is a diamond shape, make sure you moisten the edges with water so it sticks closed.  Place 2 heaping tablespoonfuls of filling in wrapper and fold up bottom to make a triangle over the filling.  Then fold in the 2 sides to also triangle in.  Then roll it up.

Again heat a pan with olive oil and when heated place rolls in.  You really need to watch them because they cook fast!  Only a couple minutes on each side - they should be lightly browned all over.

That's it - a healthy dinner that does not take too much time or effort.
Enjoy with your Sauvignon Blanc :)

One of my recipes in the Non-GMO Cookbook

I am so excited to have one of my recipes in the Non-GMO cookbook!  If anyone wants to order one the proceeds go to the Non-GMO project :)

You can order here:

This martini is cool, refreshing and on the sweet side...enjoy! 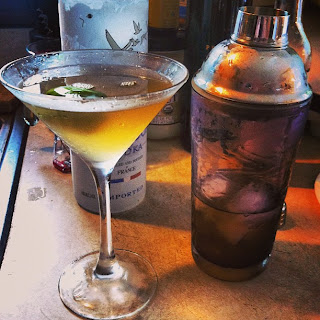 Shake it up and pour in a chilled martini glass - you're welcome.

Please watch this eye-opening and just plain sickening video on food production.  What can we do to stop this?
Posted by s at 6:37 PM No comments: 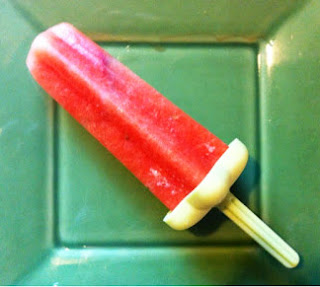 This is a super-easy, really fun and totally healthy snack for kids and one that can easily be turned into an adult beverage for mom with a little vodka or tequila ;)

You will need popsicle molds - try to find ones that are BPA free, I got mine at Chef Central in Paramus.

I do this with my immersion blender but a food processor or blender will work just as well.
Cut open watermelon, roughly chop into about 1 inch cubes and remove any seeds.
Blend watermelon, honey and lemonade until completely puréed.
Pour into popsicle molds (depending on size of molds it should make 5-6) then add in strawberry slices and freeze until frozen.

That's it - these taste awesome - I know you will love them as much as your kids will!!!

Now, if you want to make some extra you can pour it over ice in a rocks glass,  add in a shot of vodka or Patron Silver and garnish with a few strawberry slices.  OR you can throw all that in the blender with a bunch of ice and have a frozen cocktail that is also pretty healthy ;) 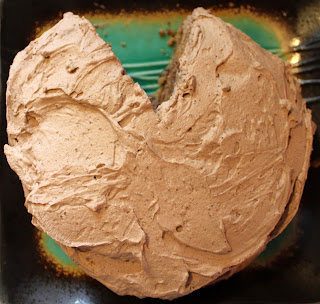 This cake is the most delicious, wonderful, fluffy piece of heaven that you will ever have.  It starts with home made chocolate chip cookies and it ends with a decadent chocolate icing.

Ok, so start out by following the Freaking Awesome Chocolate Chip Cookie recipe, except instead of making small cookies make four BIG cookies.  Take the cookie dough and form 4 discs on a greased cookie sheets each 6 inches across and about 3/4 of an inch high.  It will take a little longer to cook these, approx 15 minutes or until the edges are lightly browned.  Take them out of the oven and let them cool on the cookie sheet for about 5 minutes so they set.  Carefully transfer them to a cooling rack making sure to use a large enough spatula so they do not break.  Let them cool completely.  You can make the icing while they are cooling and also use the remaining cookie dough to make more chocolate chip cookies :)

Beat all ingredients on med-high until you reach a whipped cream consistency - approximately 2-3 minutes.

Place in refrigerator for 8 hours or overnight.  Remove from pan, remove parchment paper from underneath, plate it and serve cold.  Excellent for Spring and Summer events and soooooooooo damn good :) 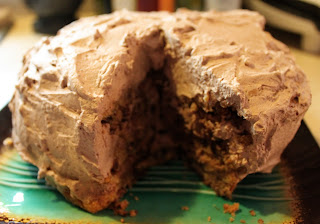 April 8 is Food Bloggers Against Hunger Day and I am participating by posting a healthy and affordable organic meal that is easy to prepare.  Hunger is a serious issue in America with one in six Americans not being sure where their next meal is coming form.  This issue is important to me as I have struggled myself at certain times in my life to afford food.  Now I volunteer to help run the farmers' market in my town and promote affordable healthy alternatives to junk as much as possible.  Many parents want to give their children healthy meals but do not think they can afford it - I am here to tell you you can :)

A great trick in buying organic foods is to make sure that you have use for the leftovers to make a second or third meal so plan out what you will make that week in advance so you know exactly what to buy.  Also buy fruits and veggies that are in season as they are the cheapest.

Things like dried beans, quinoa, sunflower seeds, chicken drumsticks, frozen veggies, pasta and brown rice are not expensive - even the organic kind.  Bananas, apples, carrots and sweet potatoes are often among the cheapest fresh produce and are all packed with a ton of vitamins and minerals.

Use spices to add flavor and keep fats to a minimum - and don't go crazy trying to buy every spice at once.  Buy one a week, especially if money is an issue.  The ones you will probably use most are salt, pepper, garlic powder, chili powder and cinnamon - that should cover most areas.  I started cooking a lot after I had my son and at first I thought I needed every spice there was at my fingertips but soon found out I only needed a handful of them.

Not having enough money for food is stressful and terrifying - especially when children are involved.  When I was pregnant with my son I was single and had to stop working because of pregnancy complications.  I was forced to go on government assistance in the form of food stamps.  Going on food stamps was a humiliating and frustrating experience.  In no way does it cover the cost of what a person actually needs to eat and anyone who thinks that being on food stamps is in some way getting a "free ride" is an ass.  I was lucky enough to be able to go and eat at my parents' house fairly often or I have no idea how I would have had enough to eat, especially since I was pregnant.

Now, that being said, I know from experience that when you are in that situation and you go to the grocery store and see 4 for a dollar mac and cheese you think that is all you can afford.  But you can actually make it work with healthier food.  Become familiar with the produce section and look for deals.  Become creative in cooking - I know time is a luxury but try to take a few minutes and figure out some staple, cheap and healthy recipes - it is worth it to you and your family.  I understand that all organic is unreachable for many people but try to buy as much organic and non-GMO foods as possible - the benefit to yourself and the planet is invaluable.


The following recipe costs about $4 and should feed 5 people 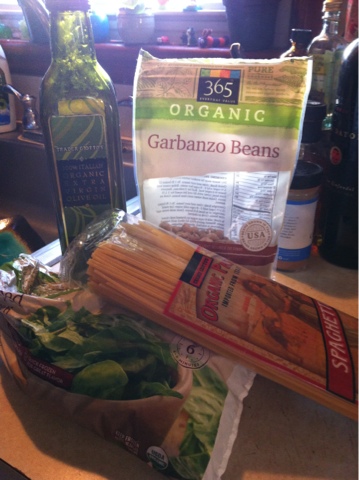 Prepare pasta as instructed on box.

While that is going on heat olive oil in a pan and throw in garlic.  After a minute throw in carrots and beans and cook for about 3 minutes then add in spinach, butter, salt and pepper.  (Not too much salt)  Cook for about 5 minutes.

Drain pasta and mix in pan with beans and veggies.  Serve with a little grated cheese.

The ingredients left after you make this meal should leave you with plenty to partially or mostly 3 or 4 other meals.  You can do more than you think with beans, carrots and spinach ;)

Here are some other low-cost meals:


Pancakes from Scratch - you can freeze homemade pancakes in freezer bags and they are soooooooo much better for you than store-bought frozen pancakes.

HAVE YOUR VOICE HEARD!

Check out some facts about hunger and obesity problems in the U.S. Food Facts

A Place at the Table is an awesome, shocking and inspiring documentary on hunger in America and is available on Amazon and itunes

"Responsibility does not only lie with the leaders of our countries or with those who have been appointed or elected to do a particular job. It lies with each one of us individually." - Dalai Lama